I am 47 years old and started running when my daughter was born in November 2017.  I weighed 235 pounds and wanted to be a faster, better Dad for her.  My sports history is wrestling, so I was used to starving and suffering, but never running.

I started with a goal to run for six minutes, since wrestling matches usually last that long.  My run trail is a quarter mile of flat old grassy rail road bed, but it’s mine and I use it.  I wore a path through it within months and now it is a scar one can see from google maps.  Like a crack in the earth, I carved it when I learned six minutes was way too easy.

In the first year, the first thirty pounds melted like snow. I never put a time or a clock to my hazardous weight loss program. After all, I refuse to diet. I eat anything I want whenever I want.  Although I try to skip some breakfasts, and lunches, I never starve, like back in the day.

In September of 2020, I hit my weight loss goal of fifty pounds gone, a cool 185.  The goal felt empty, and I could not figure out why.  I had promised myself a new suit, but the person in the mirror had no use for one.  But I lost the weight, had to buy a new wardrobe and friends barely recognized me.  I continued running, but the ”running”  idea got stale.

By the Summer of 2021, I was struggling to stay motivated, so someone suggested a 5K race.  I picked the Lakeland, FL 26th Annual Watermelon Run because runners get three 5K races for the price of one, for each Summer Month:  June, July, and August.  Plus it’s officially scored and has the automatic pictures soon after.  The race proved to be well organized, and started at 7 AM sunrise, totally my style.

The first June race went great because I was running for me, no competition, just the fun of the race.  With my 28:07 time, I couldn’t wait to check the website pictures.  That’s when we met.  The photo finish said it all, my competitor had shown up. 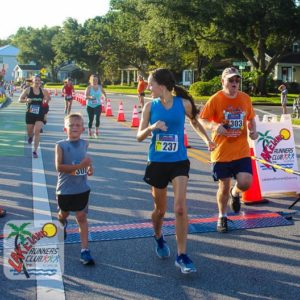 I motivationally used his name and image to prepare for July, and eventually August. I picked up the pace and got my new best friend, the Nike Run app.  This tool automatically calculates and tracks your pace, time and distance.  Pace was a new concept.  Literally, the human speedometer is how many minutes it takes you to run one mile on average.  I was a 10:30 per mile on my first months’ pace with the app.  Terrible, was my first thought.  I ran a 9:07 my first 5K race, when I didn’t know what pace was.  I knew I could do better and set goals to make that happen.

By July, I had dropped my daily grind race pace to 10 minutes/mile  by running  at least five times a week.  I was accumulating 70-80 miles a month, what I believe was on pace to beat “JB”.  By now,  my mom, spouse, friends, and friends of friends had been told of Jefferson Blizzard and I had pinned him up as a focal point on my runs.  Mind you, never in a negative way but as a motivator.  Nothing is more motivating than getting your ego bashed in by a pint-sized bolt of lightning.  I knew it would take effort to create something great, but I could not live with not trying to beat JB. 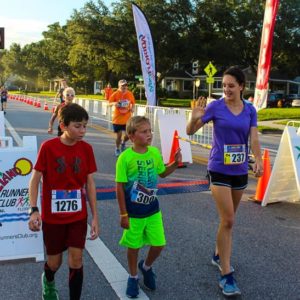 I decided to give Jefferson a  cash reward and thank you card before the final race.  To avoid the inevitable awkwardness, I handed it to his mother,  “for Bib 300” as his father watched me.  I headed for the bathroom long line as the race was soon approaching and my strategy was to hang back from Jefferson and catch him at the end, just like he had caught me in race two.  He was running with an adult male this time (August), and I had planned to mark them again before the race.

With 700-900 racers, I searched through race corrals one through three and was standing in corral four when our anthem began. I was embarrassingly angry that I had lost him in the crowd and realized I now had to start in corral four.  I stood with honor, hat on my heart as my strategy faded away.  My perfect race plan was crumbling as I heard the sound of the starting horn.

I decided to run and just run.  I paced through corral three by the first mile, and reeled in corral two by the second mile. At the two-mile self-serve water stand,  I could see runners ahead for about a half-mile.   That’s when I saw Jefferson as a tiny dot; however, he was easy to spot as one of the smallest runners so far ahead of an adult pack of runners.

I realized he started nearly a minute ahead of me, and the idea of catching up was something I debated for about 100 meters.   I knew I had him beat by time because of my position, but If I could physically beat him, that would create a memory of a lifetime.  I had the advantage of surprise along with the passion to win.  When I saw him run off the course,  he jumped up and playfully whacked some Spanish moss in an oak tree.   That whack inspired me to push harder.

At the three-mile mark, he was only about 20 yards ahead of me.  Close enough, I  heard his parents cheer him onto his final sprint.  Jefferson leaped into his own high gear as he had done the previous two races, leaving his running coach behind taking the final stretch on his own.

I did my own mental math.  I had been training all Summer in the afternoon heat 90-95 degrees,  always exceeding the 5K mark and always pushing the sprint finish, like Hassan won the gold on the 10,000 meters in Tokyo.  So, I pushed the pace.  Before I passed Jefferson, I told him, “Come on Jefferson, don’t let me beat you.”  I am almost sure as I passed, his little heart burst, but out flowed my tears.  I was emotionally broken by the moment.  I was overjoyed to win, but saddened that I had beat Jefferson.

I lost him at the finish just for a moment, because he was so close to catching me.  Only feet behind me did he finish like a warrior.  The picture below says it all, one high five was all I needed to find my legacy moment.  I had finished and met my goal.  I had beat Jefferson Blizzard. 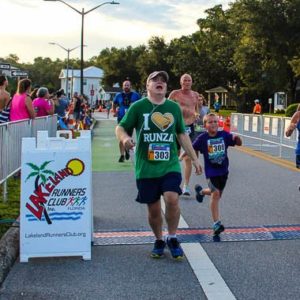 Jefferson has been running  since he was 3, and with the LRC Kids Run Club since he was 5.  The LRC Kids Run Club is a program that prepares kids for a lifetime of running. The program is held during the school year, is gender-neutral, and is designed for children in kindergarten through fourth grade regardless of school affiliation.  The emphasis of this program is on participation and developing a healthy lifestyle as opposed to being a competitive running program. The workouts include stretching, repeats, sprints, and distance runs.  Learn more…

Jefferson placed first in his age group for the series, having the lowest cumulative time for the three races for runners age nine and under. Results and photos from the 26th Annual Summer Sunrise Watermelon Series are available here. 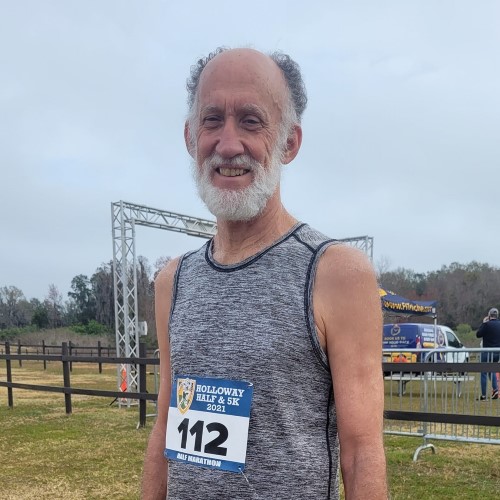 Ken likes running fast.  While his approach to training may not be textbook, he discovered what captivates so many of us about the running community – that everyone is welcome and the right way to run is simply to get out there and run. 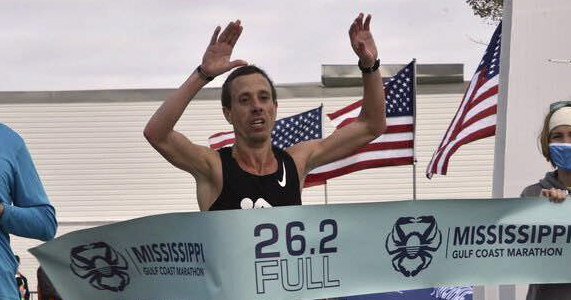 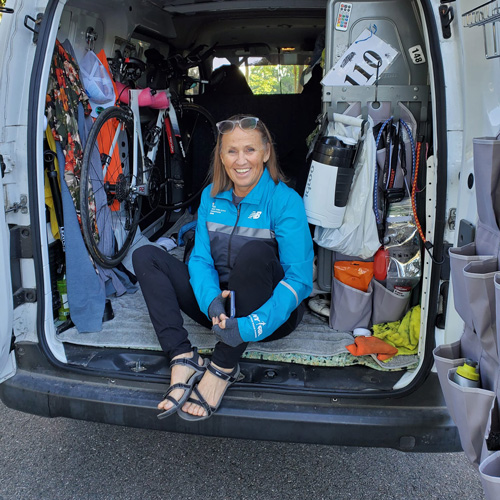 You may know Roxanne Youngs by her hashtag #whatsyourgrandmadoingtoday and maybe you think of her as the little engine that could (do anything!). In her story, she shares how it took her forever to get up the nerve to go the LRC group runs and how looking back, going is one of the best things that has ever happened to her. 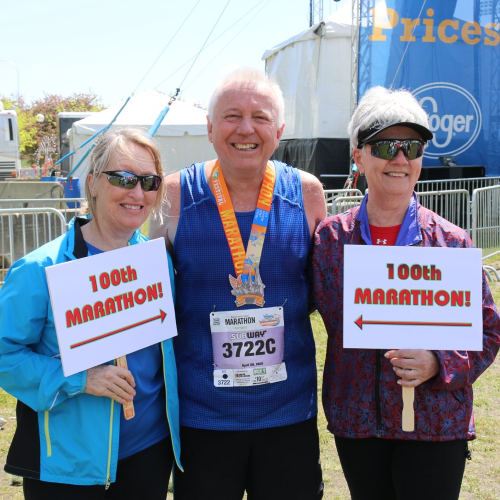 A runner for the past 40 years, Kenny Greenwell still has big goals at age 72. Kenny ran his first marathon in 1984 in Louisville, KY and finished his 100th in Louisville in 2018. He’s now targeting a half marathon goal of 100, and Kenny is giving himself eight years to finish the last 31 13.1 events.